an exhibition and commentary on the paintings of Savina Capecci

“Human figures are always the protagonists of the most recent paintings by Savina Capecci.” 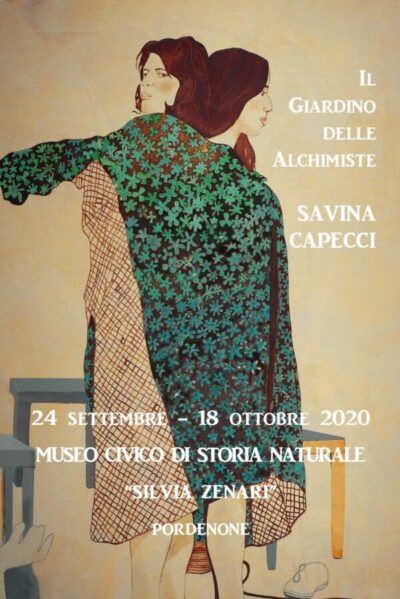 “Most of the time they are people like her, like us: girls with handbags on their shoulder, girls walking (Total eclipse of the mind) or girls curled up in an armchair, without fear of spoiling their beautiful red dress (What if we were the ocean and not the waves). Around these girls, however, the situation slips out of the control of our gaze and takes them away from the normality of a daily scene; a spongy moon hangs in the dark, and the ground floats among a fertile blooming of pinwheels that rest in unknown depths with their fragile supports, tall and thin as the foundations of Zenobia.
Even elsewhere, where some harmless stools, a forgotten shoe, or an electric cable in search of
socket seem to reassure us about the quiet normality of the space inhabited by the characters (The Alchemists’ Garden), what creates a margin of ambiguity is the hint of  the illusory splitting of the draped protagonist, a draping that, instead of defining her volumes, make them enigmatic.
Then, even the flowery fantasy of the fabric is not immune from the doubt of a transmutation, and its swarming green – which opens up to welcome the modern symbols of a possible contamination – skims the dark dimension of the mater tellus.
It is therefore implied the sensation that a fundamental imbalance animates the lives of these characters and its veiled relationship with the world of nature, as it already happened in the previous series The transgenic attack, some pieces of which are displayed in this exhibition. For the Alchemists it is the ever-evolving horizon purposefully sought-after, or anyway assimilated into the awareness of its implications of instability, while other characters seem to undergo it without fully understanding the process of hybridization affecting them, and its ability to redefine their connotations (Transgenic awakening).
Is it threat or a promise? It makes people wonder, when the latent discomfort envelops figures in which only the anatomical appearance of a mannequin remains human, immersed in a silence that disturbs as it springs from the impossibility of expressing oneself (The noisy silence of the untold). Evoked by a painting that alternates large fields of colour and clear lines to the spatiality of insisted textures, these acephalous or split in half simulacra become also metaphors of our social existence; in pairs or in groups (Total sale), they seem to measure the distance between the rituals of consumerism, and the authenticity of  an experience made not to be instantly “posted” but concretely lived, in the pleasant murmur of the things that move and of our time, left free to pass. 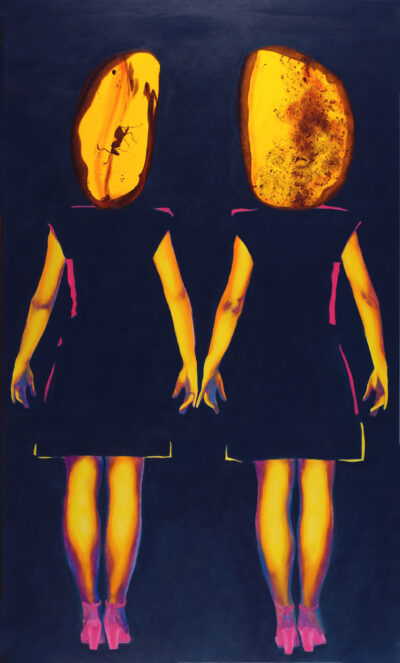 lives in Pordenone, in the North-east of Italy. She studied first in Trieste, completing a master’s degree in International Economics. Capecci continued her studies in Venice, at the Academy of Fine Arts_ graduating  in 2017 with full marks in Visual Arts, with a specialization in painting.

In 2017 she worked at the Free Academy of Fine Arts in Klagenfurt as assistant to the professors in the classes of painting, as well as gaining prominence as a professor at the Artistic High School in Pordenone, and in 2019 Capecci received a grant from the Ludwig Catel Foundation to attend the Paulina Olowska’s painting master class at the International Summer Academy of Salzburg.

Capecci is an Italian emerging artist whose paintings have been selected for exhibitions and biennials both internationally (Germany, Malta, Austria, Poland) and in Italy_ including the distinction of a finalist artist in the national painting art prizes and competitions.

and the Department of Culture of the Municipality of Pordenone, Italy

present the paintings of Savina Capecci